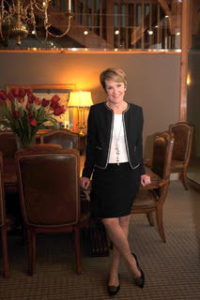 Barbara N. Lyons, Esquire founded the Bucks County Mediation and Arbitration Center (BCMAC) to provide parties to disputes with alternatives to traditional litigation. An experienced attorney since 1981, Barbara practiced civil litigation as both defense and plaintiff’s counsel which gives her a unique perspective on the resolution of legal matters – with a penchant to cut through the clutter and resolve disputes. Barbara has been a dedicated neutral attorney since 1994 when she began to focus her practice in all methods of resolving disputes outside of the court system.

Barbara has served as a member of the faculty at the ABA Advanced Mediation Institute. As a member of the Senate Advisory Commission on Alternative Dispute Resolution, Barbara helped work to create systems of alternative dispute resolution throughout the Commonwealth. She spearheaded the creation of the Bucks County Mortgage Foreclosure Diversion Program in 2009 and has since served as a volunteer mediator for this program.

Barbara also serves the greater community as the Bucks County Pennsylvania, Doylestown Township Chairman of the Board of Supervisors since 2002 serving now her third elected 6 year term. In 2015 was awarded the Pennsylvania Association of Township Supervisors President’s Leadership Award chosen from over 6000 supervisors across the Commonwealth of Pennsylvania for her dedicated service to the community. Following the tragic school shootings in Sandy Hook, Connecticut, she was appointed to serve on the Joint State Government Commission for the General Assembly in Pennsylvania Advisory Committee on Violence Prevention. She has volunteered her time and talents to numerous organizations and has provided pro bono legal representation to abused women for over three decades.

Barbara serves the community in various other ways including director and past president, at CB Cares Educational Foundation and as director for the Lenape Valley Foundation. Her personal story was of such interest that it was selected from more than 1500 others to be included in the American Bar Association Commission on Women anthology, Grit. The Secret to Advancement: Stories of Successful Women Lawyers, published in 2017.

We usually respond within 24 hours

We offer attorneys an alternative to the cost- and time-consuming litigation process with our professional and experienced approach to case resolution.

We offer attorneys an alternative to the cost- and time-consuming litigation process with our professional and experienced approach to case resolution.

Do you want a free sketch for your homepage? Visit weblifydesign.com

Linkedin-in
We use cookies to ensure that we give you the best experience on our website. If you continue to use this site we will assume that you are happy with it.I agree